GlobalWafers Inc (環球晶圓) yesterday said it is in final talks to acquire Germany-based Siltronic AG in a 3.75 billion euro (US$4.5 billion) deal, which might help it compete with its closest rival Sumco Corp of Japan.

The acquisition would be the fifth for GlobalWafers since 2008, as it has grown to become the world’s No. 3 supplier of silicon wafers through such deals.

GlobalWafers, which has a 17 percent market share, would see its market position greatly elevated to 30 percent when combined with Siltronic’s 13 percent, according to a presentation Siltronic gave to its investors at a quarterly conference in August. 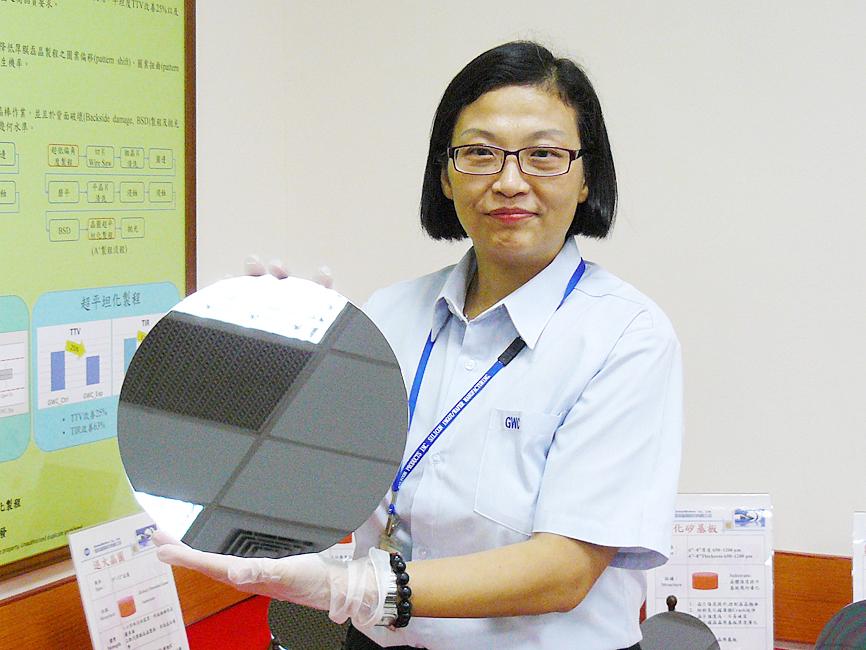 GlobalWafers Co chairperson Doris Hsu holds a silicon wafer at a media gathering at the Hsinchu Science Park on Sept. 24, 2015.

The deal would add five fabs to GlobalWafers. Siltronic, the world’s No. 4 silicon wafer supplier, operates two 12-inch fabs in Germany and one in Singapore, as well as two 8-inch fabs, one in Singapore and the other in the US, according to its Web site.

GlobalWafers has said its short-term goal is to expand its market share in the 12-inch and 8-inch silicon wafer areas.

The announcement boosted the share price of GlobalWafers by 9.84 percent to NT$558 on the Taipei Exchange yesterday.

Siltronic and GlobalWafers are working toward a formal announcement of the signing of a business combination agreement in the second week of this month, following discussions and approval by the supervisory board of Siltronic and the board of GlobalWafers.

The two companies are “near final discussions to enter into a business combination agreement, pursuant to which GlobalWafers would launch a voluntary tender offer to Siltronic shareholders with an offer price of 125 euros per share,” GlobalWafers said in a statement.

In addition, the executive board of Siltronic intends to propose a dividend in line with the company’s dividend policy of about 2 euros per share for the fiscal year 2020, which is expected to be paid prior to the completion of the transaction, the statement said.

Siltronic would pursue an essentially unchanged business strategy, the social partnership with its employee representatives would be maintained, and there would be no site closures or layoffs for operational reasons in Germany until the end of 2024, GlobalWafers said.

GlobalWafers on Nov. 10 gave a positive outlook for next year and forecast that demand to be close to the levels in 2018, which was the best year for the industry.

Almost all of its fabs are fully utilized or near 100 percent capacity, and the company expects better demand visibility for this quarter and next quarter, it said at the time.

As of the end of last quarter, the Hsinchu-based company had about US$1.1 billion in cash or cash equivalents.