Samsung Electronics Co yesterday said that it is grappling with the fallout from a “serious imbalance” in semiconductors globally, becoming the largest tech giant to voice concerns about chip shortages spreading beyond the automaking industry.

The company, one of the world’s largest makers of chips and consumer electronics, expects the crunch to pose a problem to its business next quarter, Samsung cochief executive officer Koh Dong-jin told an annual shareholders’ meeting in Seoul.

Samsung is also considering skipping the introduction of a new Galaxy Note — one of its best-selling models — this year, although Koh said that was geared toward streamlining its lineup. 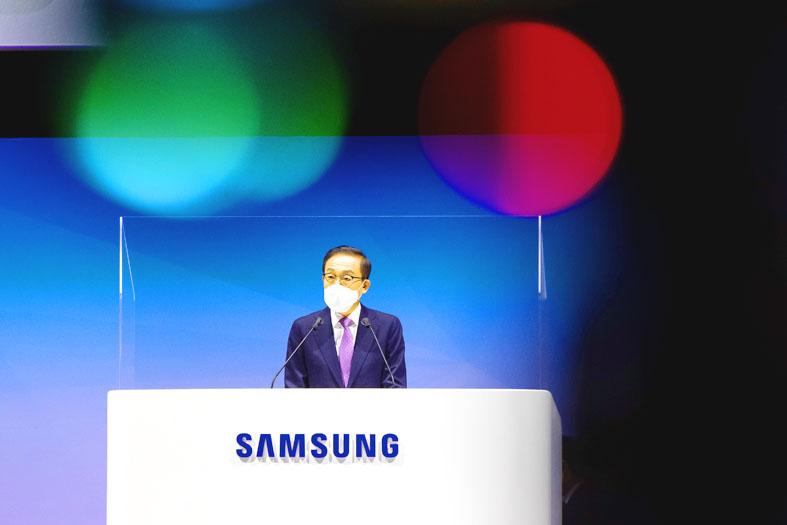 Industry giants from Continental AG to Renesas Electronics Corp and Innolux Corp (群創) have in the past few weeks warned of longer-than-anticipated deficits thanks to COVID-19-era demand for everything from vehicles to game consoles and mobile devices.

Samsung, the world’s largest smartphone maker, is working with overseas partners to resolve the imbalance and avert potential setbacks to its business, Koh said.

Samsung’s Note series contributed to an estimated 5 percent of the company’s smartphone shipments over the past two years, but accounts for a more significant chunk of revenue because it is one of the priciest in the lineup, International Data Corp said.

“If Samsung is publicly talking about future products, you know that the silicon crunch is serious,” said Avi Greengart, analyst and founder of consultancy Techsponential.

Chipmakers such as Samsung and Taiwan Semiconductor Manufacturing Co (台積電) are at the forefront of a global effort to plug a shortfall in supply of chips, the building blocks of a plethora of consumer gadgets. The deficit has closed auto plants around the world, and now threatens supply of other products.

The outages are likely to affect Samsung’s mid-tier phones and laptops more than its top-of-the-range models or server chips, said Greg Roh, a senior vice president at HMC Securities & Investment.

“There’s a serious imbalance in supply and demand of chips in the IT sector globally,” said Koh, who oversees the company’s IT and mobile divisions.

“Despite the difficult environment, our business leaders are meeting partners overseas to solve these problems. It’s hard to say the shortage issue has been solved 100 percent,” he said.

Samsung might decide not to introduce its Galaxy Note during the second half of this year, breaking a years-long streak of annual launches for the marquee line, Koh said.

“Note series is positioned as a high-end model in our business portfolio,” Koh said. “It could be a burden to unveil two flagship models in a year so it might be difficult to release Note model in the second half. The timing of Note model launch can be changed, but we seek to release a Note model next year.”