Three months ago, the chipmaker estimated that revenue would grow 20 percent this year from last year, reaching its long-term growth target of 15 to 20 percent annually.

“Moving into the fourth quarter, we expect our growth in revenue to be supported by strong demand for our industry-leading 5-nanometer technology driven by 5G smartphone launches and HPC-related applications,” TSMC chief executive officer C.C. Wei (魏哲家) told investors in a telephone conference. 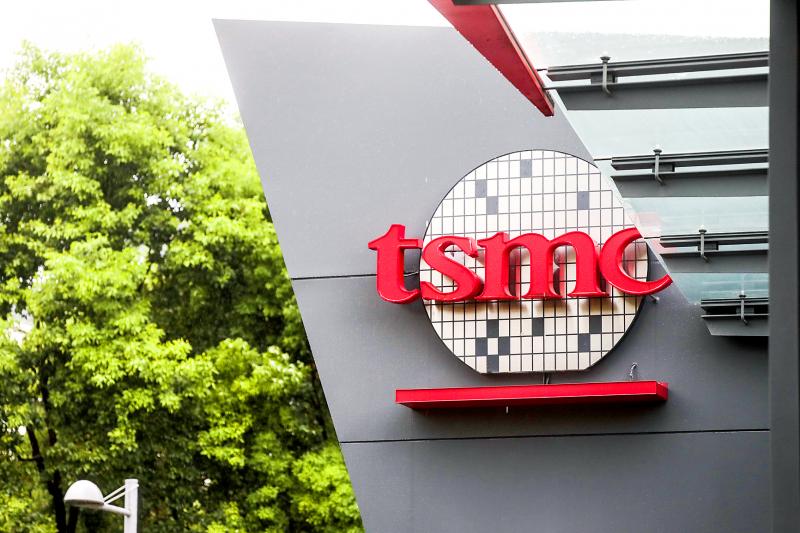 Signage is displayed at Taiwan Semiconductor Manufacturing Co headquarters in Hsinchu on July 28. The company yesterday raised its revenue forecast for a second time this year.

Earnings per share rose to NT$5.3 last quarter from NT$4.66 a quarter earlier and NT$3.9 a year earlier.

The chipmaker expects the penetration rate of 5G smartphones to reach 17 or 18 percent this year, with each 5G phone featuring 30 to 40 percent more semiconductors than 4G models.

Given the growth momentum of 5G and HPC-related applications, TSMC said it is confident that 5-nanometer technology — the most advanced technology available — would make up 8 percent of the company’s total wafer revenue this year, Wei said, adding that this figure might increase to 20 percent next year.

This quarter, revenue would grow mildly to between US$12.4 billion and US$12.7 billion, representing growth of between 2.14 and 4.61 percent from US$12.14 billion last quarter, TSMC said.

Gross margin is to reach between 51.5 and 53.5 percent, compared with 53.4 percent last quarter, due to unfavorable foreign-exchange rates and margin dilution from its 5-nanometer technology, it added.

TSMC said that Huawei Technologies Co (華為) would not contribute to its revenue this quarter, as it stopped shipping chips to the Chinese company on Sept. 15.

The chipmaker dismissed recent media speculations that it has obtained approval from the US government to resume the supply of certain chips to Huawei.

This was “unfounded,” Wei said.

Asked by an investor whether Washington’s export restrictions on Semiconductor Manufacturing International Co (中芯國際), China’s biggest foundry, would provide a boon for TSMC, Wei said the company is evaluating the impact.

Due to the COVID-19 pandemic, heightened US-China trade and other geopolitical tensions, customers tended to increase their inventory, Wei said, adding that customers are concerned about potential long-lasting supply disruptions.

Asked if TSMC has plans to build factories outside Taiwan to minimize operational risks amid heightened tension across the Taiwan Strait, Wei said that it would keep its investment focus on Taiwan, as it remains the center of its research, development and manufacturing.

The chipmaker also adjusted upward its worldwide revenue forecast for the semiconductor industry to a 5 percent annual growth, rather than a slight increase.

The foundry sector would grow about 20 percent year-on-year, faster than the previous estimate of between 15 and 17 percent, it said.

“Due to the pandemic, digital transformation has been accelerated,” Wei said.